We will solve customer`s problem in the best plan

Because of the experience of magnetic manufacturing，we can solve all kinds of problems.
Have advanced knowledge and the planning ability magnetic material professionals can support customers solve different problems
We will after hearing the problems, thoroughly reviewed the cost, production system, design specification, quality and delivery，and provide new solutions to customers
Please consult with our professional staff who have abundant experience and solved all kinds of problems

All is for the customers
This attitude is widely praised by customers，got many kinds of orders
As a professional in magnetic manufacturing ，We satisfy our customers with higher precision and higher quality products，
Continuously improve“quality management ability ”“analysis ability ”“product ability”“development ability”“proposal ability”and strengthen the system，
Take the magnetic material as center，Continue to challenge and try to expand business possibilities. 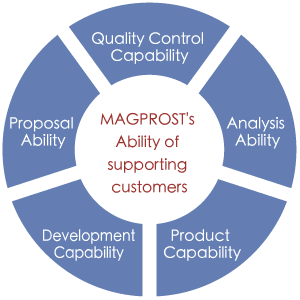 Responding to challenges and guarantee quality
From planning scheme to stable supply of production ，all managed by MAGPROST
After being commissioned, plan, file, sample, evaluate and analyze，and repeat confirmation of the project selection，after got the optimal evaluation results then enter the mass production
Moreover，The design adjustment and specification changes can also be quickly matched，Stable supply is achieved on the basis of the quality system within the company.
The implement of the best solution of magnetic material products

The following case is that MAGPRST support all kinds of customers needs.
This one is the premise of “cost reduction”
While seeking to reduce costs， pursuit of solutions for customets’ problems continuously,We will continue to do our utmost to satisfy the demands of customers’ “want to” and “want”

「Space saving in EMC measures for EV and HEV」

Recently, EV and HEV units have been miniaturized every time the generation is renewed.
At the same time, EMC standards are also added and stricted.
In order to meet EMC standards in a limited space, it is necessary to select appropriate soft magnetic core materials and support production for installation cases with complex shapes.
However, we received consultation because there are no suppliers who can balance it and have a cost competitiveness.
We provided a CAD model of the unit that is expected to install emc countermeasure core, and immediately began selecting core materials and designing cases.
Since we handle everything from ferrite cores to nanocrystalline materials, we considered the selection of core materials without limiting them, and immediately selected the optimal core material.
After the core material selection, the case shape design is started. It was designed with the structure to obtain the maximum EMC countermeasure effect in limited space while considering vibration durability.
We delivered the initial sample with the core assembled to the case created with a 3D printer, and as a result of emc testing, we were able to meet EMC standards.
Because it was urgent, we were allowed to respond in a short delivery time of 30 days from the first consultation to the initial sample delivery.
It is an example that can cope with a wide range of core materials, and can cope with everything from the selection of core materials to the design of the case because we are able to handle it all at once.

Major automotive electrical components manufacturer H
Although emc countermeasure cores suitable for high-frequency bands are adopted, it is necessary to raise the level of low frequency band characteristics, and we received consultation on countermeasures.

It is an example that can be dealt with because we have a direct-view flow superimposed inductance measurement system that can measure up to 400A.

When we confirmed the magnet specification，focus on the shape of the difficulty of magnetization，it’s impossible to achieve the magnetic property
Analyze the results of using magnets，make some adjustments in the direction of magnetization in the same shape，can lower the grade of the material.
So we proposed a reduction of two levels 5 meterial.The torque characteristic of the motor was reduced by about 3%，but it’s within the tolerance range of the properties，The judgment is completely usable.
Other types of machines also unfold horizontally，reduced the cost of tens of millions yen successfully.

Customer：Large consumer electronics manufacturer , Company H
The magnet in the sensor used when the door opens，in order to reduce costs and improve the engineering of sensor mismeasurement，MAGPROST received the consultation.

In order to avoid detection errors during the shock from the door switch，take the tiny adjustment of magnets during assembly
For a long time，How to reduce the adjustment of magnet became a project，but there is still no satisfactory solution.
Understand the movable area of the door and the detection area of the switch sensor，then verified the compatibility of the magnetic force line.Found that the Angle management of magnetic force line is the reason.
Our proposal was adding geometry specification requirements on the magnets.And asked customers to evaluate the improved products，turned out that we don’t need to adjust the position of the magnets
In addition，We already collected magnetic field data of the entire magnet under 30 conditions，and established basic database . As a result, even changed the specifications of the door，
can also set the installation conditions of sensors and magnets according to basic data.Cut the numbers of projescts successfully and stability.

【Through the variation of magnet types and magnetic waveform ,Improve reliability and small, lightweight】

The temperature must be high，The thermoplastic countermeasures of injection molding magnets have become the main project
PPS medium is qualified for the performance ，but the price is high and the cost don’t match. There is an advantage in the cost of nylon，but thermoplastic is not required.
After receivied the consultation， first was to solve the problem of the physical reliability ，so took the isotropic sintered ferrite that is no problems on the thermoplastic side as a backup.
Customers also had some knowledge of such magnets，analysised of software by magnetic field ，it’s magnetism couldn’t reach the reaction requirement.
Take advantage of our professional knowledge of magnetic fixture，solved this problem by adjusting the magnetic waveform
It is also made isotropic sintered ferrite obtained the magnetic force.
The outer diameter of the injected plastic forming magnet was discussed for φ20,after used the isotropic sintered ferrite, the size of the outside diameter was improved to φ15,
Successfully made the whole device light weight miniaturized

Due to rich experience in magnetizing，learned professional skills at the same time,so this can be proposed

The industrial territories of MAGPROST